NT: How do you feel about soil?

DW: I’m fascinated and really intrigued by it, knowing that it is the basis of all of our sustenance and most life depends on soil in one way or another. It is extraordinarily, the scientists tell us, that its absolutely full of lots and lots of organisms, but the vast majority of which we can’t see. So it’s very mysterious and I’d love to learn more about all the processes that go on in soil that allow plants to grow and are obviously the basis of our nutrition and our food supply and how to nurture that.

From working with soil I am always intrigued by how various is it according to the weather, particularly if it’s heavy soil and what you have been digging in from previous years and how some things that you incorporate into the soil – you can’t see them the following year. It just miraculously disappears, like seaweed or good compost . And then other stuff, it’s actually rather wonderful, if you get into recycling nutrients all the time, you can actually have souvenirs like one time we attempted to cook mussels for my wife’s birthday party and then crush them up to improve the alkalinity on the soil. Each year you’d be digging them up again and you’d be remembering that occasion. It’s recycling also through the soil gives you a kind of different perspective on time as well. And then the things you can see like earthworms, I’m intrigued by how, generally if you go to undisturbed soil like if you’re planting a tree  and you’re digging over pasture, you’ll often get lots of worms and really big ones and you dig them up. But in the areas that you’ve cultivated that you’ve incorporated loads of organic matter, you don’t come across the worms so much and I don’t know whether that is because they’re deeper down and you’ve been cultivating, or because  they are shying away from disturbed soil and they don’t actually like it when you are turning it over, which of course could be support for the argument for ‘no tillage’.

NT: What do you see the role of soil and our relationship to it within the current climate crisis?

DW: I think I’ve learned recently  how critical soil is in incorporating carbon; well it contains masses of carbon and we should be managing the soil in a way to incorporate more and more of the carbon and many basic principles of  organic gardening do that but I hadn’t appreciated now important or how much we can contribute if we are more mindful of building up the organic content which is reincorporating carbon into the soil. In fact my daughter, we were having a lovely big bonfire, and she said  surely this is releasing lots of carbon back into the atmosphere and I said, Well it doesn’t matter because It’s short carbon cycles and  it would be incorporated into the hedgerows and so on, but it made me think it would be so much better if when we generate even the hedge trimmings and all the woody stuff that is too thick to  compost readily, rather than just putting it onto the bonfire , it would be better to let it rot down and let it gradually support all the masses of organisms that live on rotting wood and then ( let) it go back into the soil and build the carbon there. 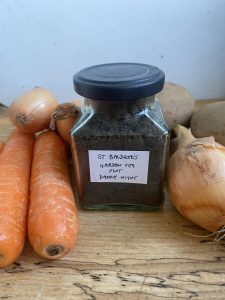