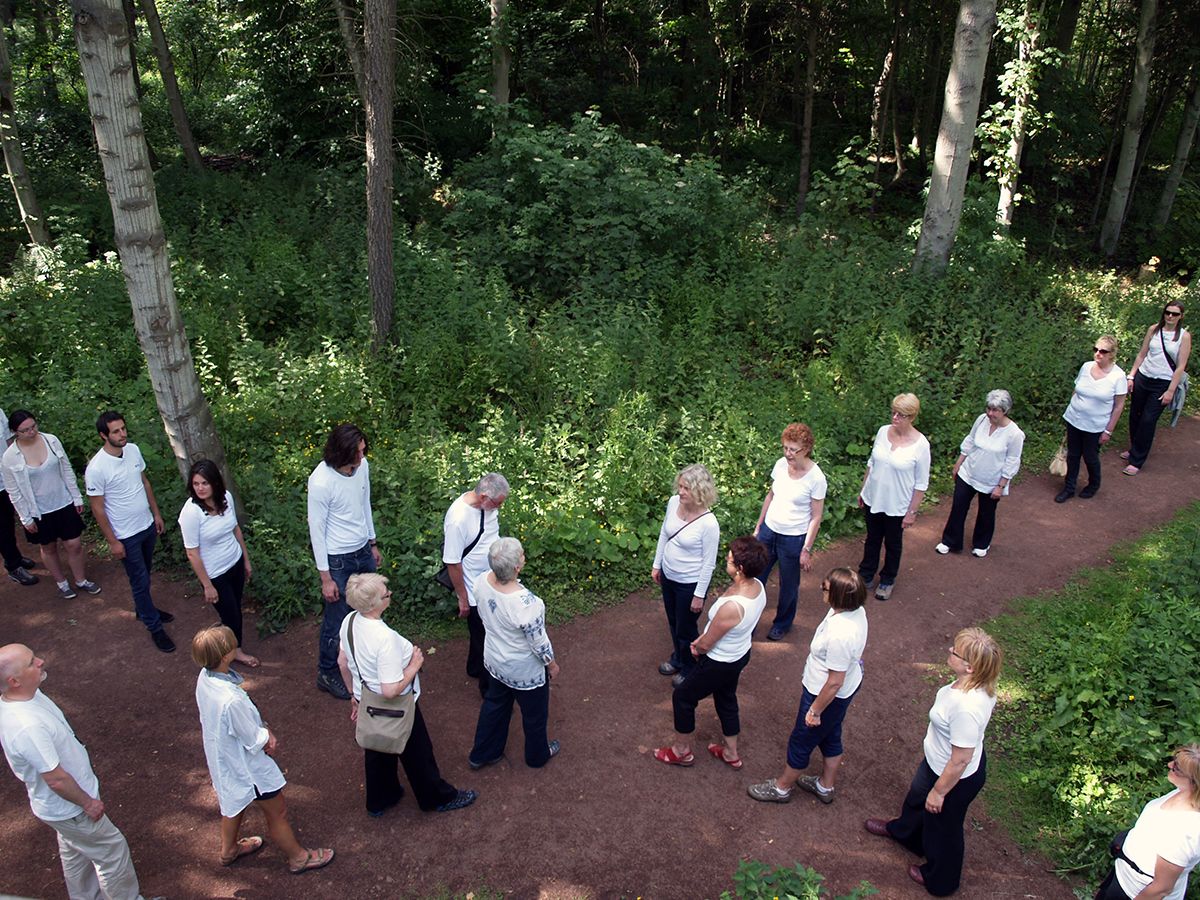 Introduction by the writer and cultural historian Chris Freemantle

‘Gert Biesta proposes that we need to be ‘in the world, without occupying the centre of the world’ (2017 3).

Helen Mayer Harrison and Newton Harrison (the Harrisons) regularly use maps putting somewhere (originally San Diego, but since then most of the places where they have worked) at the centre of a world.

Putting a place at the centre of a world opens up thinking at the domestic, settlement, national, continental and global scales. It invites considering how the place became what it is now, how it has been different, and what it could be in the future.

Practices which imagine art and ecology as a hybrid have the potential to be in the world without occupying the centre of the world. The key is the focus on relations: between living things, and of living things with their environments. Ecological sciences are one way to understand this. Art is another way to understand, and also to imagine, these relations. Art has always been ‘in the relationship’. As Duchamp said, what is art is always decided both by the artist and also by the spectator – opinions can differ.

If art is a way of understanding and imagining relations in the world, then it might sometimes be useful and sometimes expressive, but never reducible to either. If art enables us to be in the world without needing to occupy the centre, it is because it enables us to imagine something different.

North Light Arts have taken John Muir as their Polestar, guiding their work in the east coast town of Dunbar. Aspects of his philosophy are very much in tune with Biesta and the Harrisons, saying as he did, “Most people are on the world, not in it. ” North Light’s work over the past ten years has enabled artists to be in the world, in a town which is trying to work out a different way of living. The artists have each turned their experience of the place, some aspect of their relationship with it, into something that can be shared and which speaks of the place. The value of this ‘going in’ cannot be underestimated.’

Harrison, H. and Harrison, N., 2016. The Time of the Force Majeure: After 45 Years Counterforce is on the Horizon? New York: Prestel.

‘What If ?’ is a retrospective exhibition exploring ten years of inspiration and opportunity through words and images – looking back but also looking forward. Keep looking for more updates through the weeks and month of 2020.

NORTH LIGHT ARTS aims to be a catalyst for change and connection. This urge drives our work that brings people together across ages, art forms and disciplines to share creative energies and experience and to explore connections with our natural and social environments.

‘ Taking a Line’ was our first major programme that brought these themes together in a series of projects and events over the summer of 2010.

Having launched the proposal we received enthusiastic responses from artists, creatives, an archaeologist, a geologist in the locality who wanted to journey with us through time and space to connect the coastline and its geology with the archaeology of settlements from past events across the landscape. Then we celebrated in the community woodland with nettle soup, fairy trails and artworks displayed in the landscape.

For the people of Dunbar the harbour is fundamental to their sense of place and community. The notion of knitting the harbour swept through the community igniting the imagination and boundless creativity.

The Harbour Trust agreed that the Fishermen’s Store could be used a focal point and so over the course of 2 weeks children, families, residents and visitors came and went and returned to learn and share skills, have tea and cakes, tell stories and reminisce. We brought them to the harbour and they made astonishing interpretations of the people who worked there – over 100 people helping to make the fishermen and lifeboat crew, seals and seagulls, the burger van crocheted in bright yellow wool and boats, houses, the castle, all instantly recognisable to the people of the place.

Projects rarely satisfy all expectations but Knitting the Harbour exceeded them all. The buzz of creativity, companionship and connections across all ages and groups in the community, the sense of place and identity, confidence and pride were palpable.

These were to form the aims of the fledgling organisation North Light Arts.

← THE PAVILION MESSAGE TO THE EARTH →